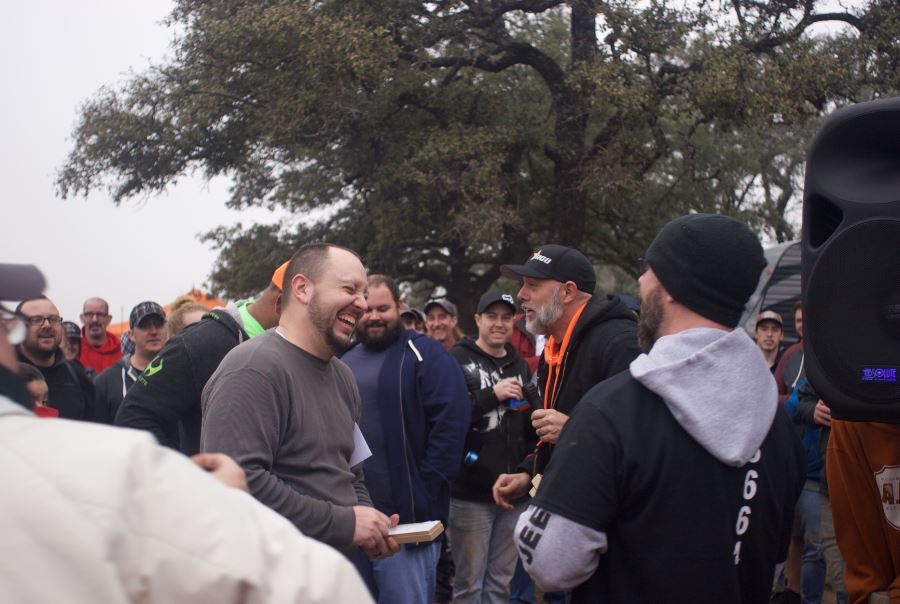 If you are a Jeep lover and you live in Central Texas, you have probably heard about Austin JeepPeople‘s biggest annual event, the Polar Bear Run.

The Austin JeepPeople Polar Bear Run brings together members of the Jeep community for a weekend of family, fun and giving back. The highly anticipated event’s motto is, “Drive down warm and get cold!”

“It’s a fundraiser that happens every year,” explained Arthur “Art” Hale, a plant operations mechanic at Seton Medical Center Harker Heights. “People get to ride on trails, take their doors and roofs off and have a good time,” said Arthur. The Polar Bear Run takes place at Hidden Falls Adventure Park, just outside of Marble Falls, Texas.

“Brad joined Austin JeepPeople years ago and has always had a Jeep fetish,” shared Arthur. “He loves Jeeps and going out and riding trails. It started when he was in high school.”

The cold temperatures in late January didn’t freeze the community’s efforts in raising money for charities. The majority of the funds are raised through a bucket raffle – items are donated by different organizations. This year, 190+ items were donated to the raffle. Each year, charities are determined via a poll provided to Austin JeepPeople members.

This year’s event generated over $30,000 for Hounds for Heroes, TEXSAR and Williamson County Children's Advocacy Center.

Arthur says his favorite part of the event is spending time with family. Each year, Art volunteers alongside his wife, sons, three grandchildren and their wives, and Austin JeepPeople members. Arthur has volunteered at the Polar Bear Run for the past three years. “I’m pretty good at being ‘volun-told,’” laughed Arthur.

“Everyone helps work it. We have always been a family who enjoys getting involved and giving back,” said Arthur. “Austin JeepPeople is one big family. They are such good people to hang around. I have a lot of fun at this event.”

Arthur is proud to be involved with this event alongside his family. “Brad does an awesome job. I’m super proud of him and really both of my sons. I have been blessed and couldn’t ask for better sons.”

Arthur’s favorite Jeep is a Jeep Wrangler. What’s yours?

Eating Right for Your Heart