Texas Buddies on the Front Line 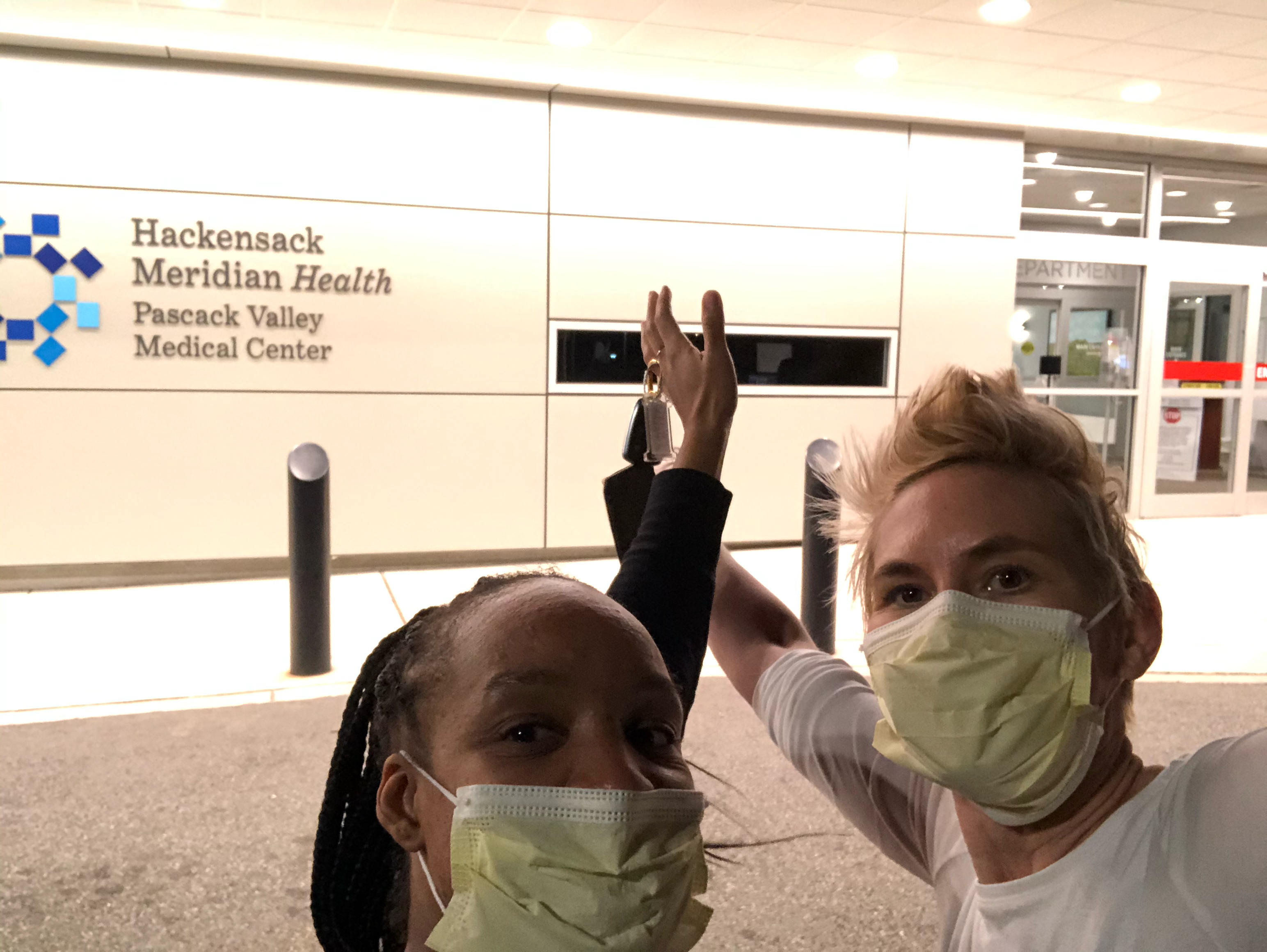 Tiffany said, “When I read that email, I immediately wanted to go.” Her first thoughts were about the news reports she had seen about hot spots on the East Coast. She said finding a way to serve there had been on her heart, and she took the email as a sign. “I wanted to be a part of something that was bigger than me.”

Although Tiffany‘s family was hesitant at first and concerned for her safety, she said they were very supportive of her decision. In turn, she committed to checking in with them every day. 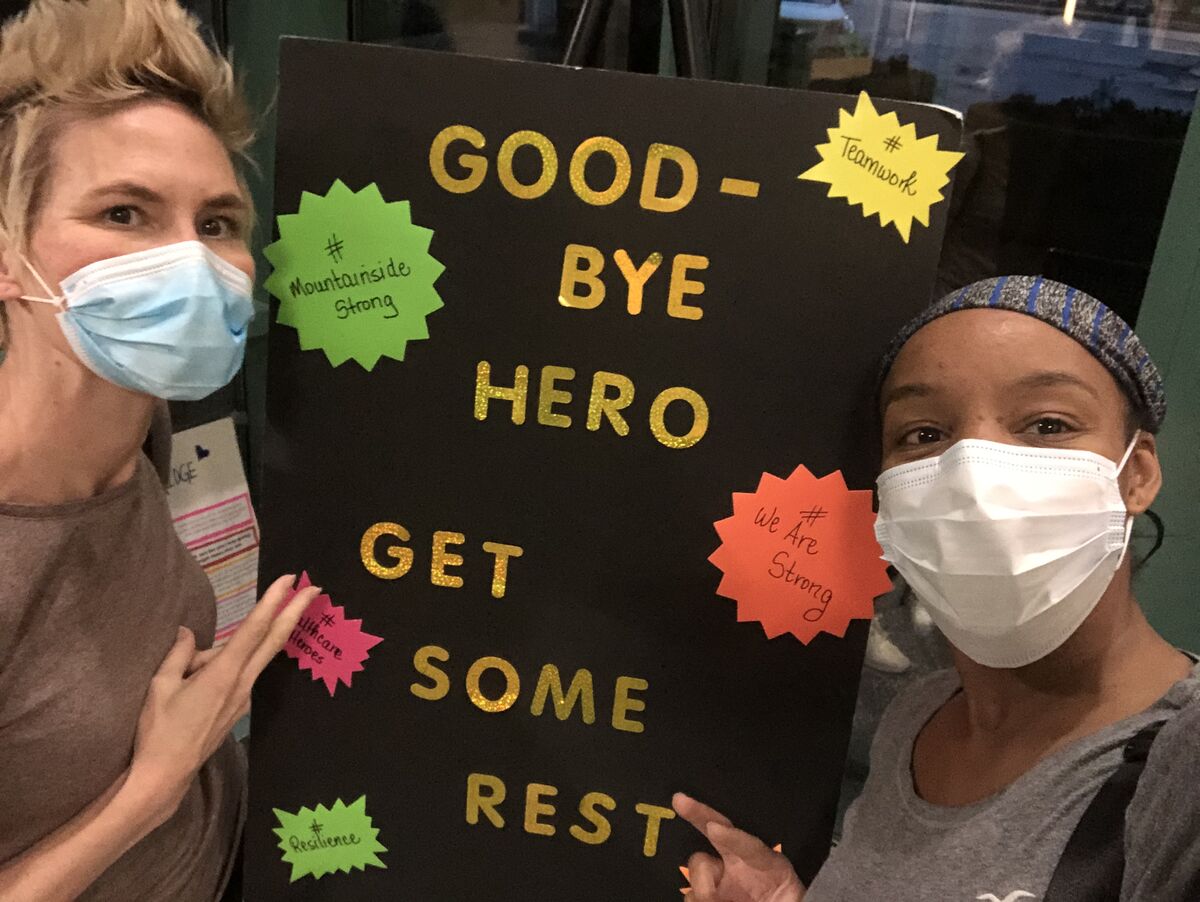 Amber’s family was also supportive, understanding her desire to serve. To help her six-year old son cope with her absence, she created a countdown of the days until she returned.

After a long series of flights, Tiffany and Amber arrived in Newark late one afternoon. They made a grocery store run so they could pack lunches and were then off to the hotel. At 6:30 the following morning, they arrived at Hackensack Meridian Pascack Valley Medical Center (PVMC), received their badges and walked into the ICU. By 7:30, they had their assigned patients. “The PVMC nurses were very helpful whenever we had questions,” Tiffany explained.

Amber recalled arriving on the unit and letting the staff know they had come from Texas to help. Cheers erupted from the ICU nurses and staff, and with that, the two friends started caring for patients.

The patients they saw in the PVMC ICU were some of the sickest they had ever seen. Tiffany remembers feeling scared. “I knew I wasn’t invincible, but I told myself I could do it.” Amber recalls her shock when she first saw the large number of ventilators, the full patient units, and IV pumps placed outside of the rooms to reduce the frequency of changing masks, gowns, gloves and face shields.

They quickly realized they would need to rely on each other, using a buddy system. As one learned the ropes, she updated the other. Amber describes a system where they alternated visits with the techs on the unit so that their patients saw someone every hour. “It ensured more human touch,” Tiffany explained.

They described their first day as “figuring things out” and the second day as “getting in the groove.” By the third day, the two friends had settled into a routine.

Both nurses felt that one of the most difficult aspects of their service was seeing patients die without having family members present. Tiffany describes talking with family members by phone, giving them updates and then assisting them to FaceTime with the patient as she held up the smartphone.

According to Tiffany, “We realized that the family’s phone call may be the very last time they will see their loved one. It was very hard for us to witness that. Because these moments between the family and the patient were so intimate, we tried as much as possible to give them a feeling of privacy. That’s something I’ve never had to do before.”

Tiffany recalls bonding with one particular woman after caring for her several days in a row. “I remember walking past her room and seeing that she didn’t look well. After I called the doctor, I talked to her and prayed with her while I looked at a photo of her the family had provided. It was good to know what she looked like behind the mask. As she was passing, I rubbed her hand and just tried to be present.”

There were also moments of light. About a week into their assignment, the first PVMC patient came off a ventilator and transferred to the general medical floor. This was cause for celebration. Nurses had come to believe their patients might never come off a ventilator.

Amber and Tiffany were moved by their experience and asked if they might be needed beyond their first two-week commitment. While they looked forward to being with their families again, they knew they wanted to return.

After going home and quarantining, they flew back to New Jersey and reported to Mountainside Medical Center (MMC) in late April. They found the ICU to be even busier than PVMC’s. Noting that MMC was also a teaching hospital, they had the opportunity to shadow a nurse on their first day.

Having already climbed the learning curve at PVMC, they did not have to ask many questions. The patients were so critically ill that their primary goal was to keep them stable through a 12-hour shift. “Our job was to maintain their blood pressure and heart rate. We witnessed patients’ conditions changing very quickly,” said Tiffany.

Looking back, both “Texas buddies” say they cherish the experience. Their time on the COVID-19 front line has strengthened their bond and changed them forever.

Occupational Therapy at Seton Medical Center Harker Heights: ‘It's rewarding to be a part of a patient's recovery’